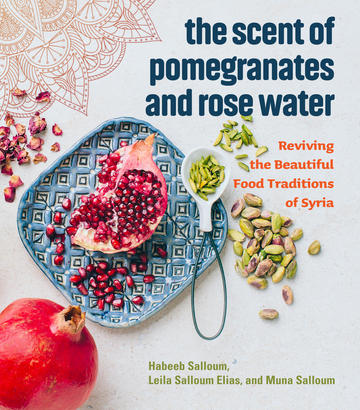 The traditions of Syrian cooking, which go back hundreds of years, are notable for their sensory components, in which aroma and texture are as important as taste and nutrition. Over the centuries, the unique dishes of Greater Syria (bilaad al-shaam) were preserved by those who cooked them. For cooks in imperial households, family homes, or on simple peasant farms, recipes were handed down from generation to generation. Despite centuries of occupation, economic hardships, and political strife, the people of Greater Syria continued to cook their bulgur, lentil, chickpea, kishk, and yogurt dishes as if life around them never changed.

Syrian-born Habeeb Salloum and his daughters, Leila and Muna, have researched and explored the far reaches of Syrian cuisine for many years (and in Habeeb's case, decades). With more than 150 recipes, their resulting cookbook paints a colorful picture of the dining tables of eighteenth- and nineteenth-century Syria, when the region was influenced by the Ottoman Empire. The book includes delectable, heart-healthy recipes -- some familiar, some never before published in English -- many of which have been updated and simplified for modern sensibilities. The book also provides a poignant window into Syrian culture and everyday life then and now -- framed by ageless and truly beautiful food traditions.

Partial proceeds from the sale of this book will benefit Le centre culturel syrien (Syrian Cultural Centre), a non-profit organization based in Montreal currently dedicating its efforts to help alleviate the plight of the displaced and those who have been impacted by the situation in Syria.

A hugely knowledgeable, deeply researched and utterly delicious book, The Scent of Pomegranates and Rose Water is a joyous celebration of the foods of The Greater Syria region. Written with so much love, context, and integrity it is a delicious journey across time to be savored for its recipes as much as its stories. -Reem Kassis, author of The Palestinian Table

Just like the juicy, gem-like luscious seeds of the ruby red pome fruit and the fragrant floral aroma of roses, The Scent of Pomegranates and Rose Water lures you into a deeply rich cultural and culinary chronological history of the traditional foods and interesting stories of Syria from ancient times to modern day in a thought-provoking movement. Habeeb and his daughters Leila and Muna are preserving their time-honored heritage and family's legacy for future generations to come as well as conserving their homeland's cultural and culinary identity in writing this work together as a family, a captivating cookbook that Syria can be proud of. -Julie Ann Sageer (Julie Taboulie), PBS host and award-winning author of Julie Taboulie's Lebanese Kitchen: Authentic Recipes for Fresh and Flavorful Mediterranean Home Cooking

Beautiful people. Fascinating food. Compelling recipes. Syrian cuisine has found the perfect culinary ambassadors in Habeeb, Leila, and Muna. Essential reading for everyone fascinated by Syrian food culture (with a fun side dish of Saskatchewan).

At a time when the glorious cuisine of Syria is becoming a recognized taste on the lips of North Americans, here comes a book to carry all of those flavors, foods--and the culture that ties it together--into the bright shining sunlight. A triumph.
-David Sax, James Beard Award winner and author of Save the Deli: In Search of Perfect Pastrami, Crusty Rye, and the Heart of the Jewish Delicatessen

From the Olive Grove