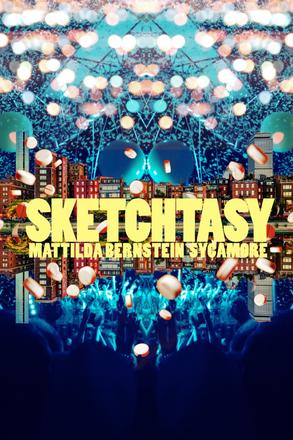 Sketchtasy takes place in that late-night moment when everything comes together, and everything falls apart: it's an urgent, glittering, devastating novel about the perils of queer world-making in the mid-'90s.

This is Boston in 1995, a city defined by a rabid fear of difference. Alexa, an incisive twenty-one-year-old queen, faces everyday brutality with determined nonchalance. Rejecting middle-class pretensions, she negotiates past and present traumas with a scathing critique of the world. Drawn to the ecstasy of drugged-out escapades, Alexa searches for nourishment in a gay culture bonded by clubs and conformity, willful apathy, and the spectre of AIDS. Is there any hope for communal care?

Sketchtasy brings 1990s gay culture startlingly back to life, as Alexa and her friends grapple with the impact of growing up at a time when desire and death are intertwined. With an intoxicating voice and unruly cadence, this is a shattering, incandescent novel that conjures the pain and pageantry of struggling to imagine a future.

If Sketchtasy doesn't become a classic, we are doomed. Mattilda has such complete command of craft here that she is able to evoke experience rather than simply describe it. Whether or not we identify with her characters, she lets us into their hearts and perceptions through sheer talent, raw honesty, and the sophisticated ability to handle word order, duration, pacing, and soul. The form of this novel is determined organically from the emotions at their core. A lesson in how to write, how to remember, how to grapple with history. -Sarah Schulman, author of Conflict Is Not Abuse

Reading Sketchtasy is like a night of stealing other people's drinks, or a much-needed slap to the face, or a little of both. Bold, glittering, wise, fun, the novel as found poem alive in the mouth of this truth-telling queen, making her way through a wasteland of other people's lies (and a few of her own), and looking for something near paradise. Follow her and live. -Alexander Chee, author of The Queen of the Night

I thought it was impossible that Sycamore could get any better, but Sketchtasy is a vivid masterpiece that rivals the likes of Last Exit to Brooklyn by Hubert Selby Jr. It's dangerous, hilarious, scary, and transcendentally beautiful. Sycamore's prose is so searing, you might want to read it with sunglasses. -Jake Shears, singer; author of Boys Keep Swinging

Every sentence in Sketchtasy is a living thing, fierce and funny and a little bit dangerous -- a voice made of coke dust and club lights, cut with crackling insight. I was completely addicted to the story of Alexa's search for connection, set in the gritty Boston nightclub scene in the 90s. Nobody writes like Mattilda Bernstein Sycamore -- most writers wouldn't dare try. -Julie Buntin, author of Marlena

Sketchtasy is a breakneck spree through a cultural moment, scratching off the patina of nostalgia to show how urgently relevant it still is. If you've heard her read, you know Sycamore's voice is one in a zillion. She's at her very best here. -Shelf Awareness

Sketchtasy is a powerful firecracker of a novel; it's not just one of the best books of the year, it's an instant classic of queer literature. --NPR ("Best Books of 2018")

Sycamore has always been a passionate and keen-eyed chronicler of the life and death of American cities, but here she's doing the best work of her life, and for good reason: she's writing for her life. With Sketchtasy, she's an avenging angel. -Seattle Review of Books

As stupefying and white-hot as the drugs coursing through Alexa's veins, Sycamore's latest is a love letter to and a formal complaint about the glitter and horror of the 1990s. -Booklist

If there's any justice in this world,Sketchtasy will become the definitive novel of life in Boston . .. It slyly trades 1990s nostalgia for a queer narrative that is mesmerizing and heartbreaking all at once. --The Millions

Descending into Mattilda Bernstein Sycamore's writing is like diving into a lake and submerging yourself into a more authentically emotional world . .. Sketchtasy unveils like a spiraling phone message from someone you love, moving at the timeless pace of a high you keep rolling through to prevent crashing. --BOMB Magazine

The prose is the star of this novel, and the prose is a meticulously crafted simulation of a consciousness at work in real time. Often, that consciousness is drunk or high, up until the point where the speaker starts attending AA meetings, but while grammar might fracture, the rhythm of thinking is continuous. What in another writer's hands might be a straightforward recovery narrative is, here, a portrait of the non-linearity of all experience, including healing, and of the relentless pursuit of political and emotional truth, moment to moment. -Literary Hub

Other Books By Mattilda Bernstein Sycamore

True to Your Roots

Everything But the Truth