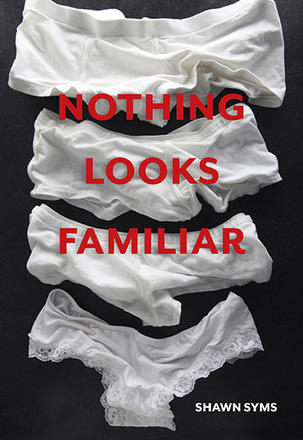 In Nothing Looks Familiar, Shawn Syms' debut story collection, characters from a wide swath of society chart paths from places of danger or unhappiness into the great unknown, each grappling with a central and sometimes unanswerable question: if you fight to change your circumstances, could it be possible to reconfigure your very identity? From bullied kids to meth-smoking mothers, characters in dire straits take measures--sometimes drastic ones--to take charge of their own fates.

With a particular focus on the lives of the downtrodden and marginalized, Nothing Looks Familiar marries a vivid and distinct sense of place--the sights and smells of a meatpacking plant; a church-basement meeting hall full of sexual abusers--with universal themes such as the nature of friendship and relationships, and the configuration of the self. In this book, men and women alike struggle to cope, to survive, and to transform their surroundings; each of them is determined to come out the other side changed. In these richly drawn, deeply nuanced stories, nothing may look familiar, but everything is up for grabs.

The stories in Nothing Looks Familiar pitch the reader into a world of meth addiction, cheque forgery, botched muggings, and dead-end jobs in abattoirs. This is uncompromising work -- kinetic, gripping, affecting, and terrifyingly true to life. -Steven Heighton, author of The Dead Are More Visible and Afterlands

Here was my experience reading each and every story in Nothing Looks Familiar: I'd arrive -- breathlessly and often shockingly -- at its end, and I'd have to set the book down. I'd have to think through my own assumptions, and how Shawn Syms was challenging me to look deeper, to find our common humanity, our fear and fury and joy. His range is incredible; we're in the mind of the kid who punishes himself for swearing, the heart of the eighty-year-old woman so desperately wanting to be touched, the hopes that the meth addict has for her children, and countless others, all drawn in direct, unflinching, near-cinematic prose. The best story writers ask us to look past what's familiar. Count Shawn Syms among the best. -Megan Stielstra, author of Once I Was Cool and Everyone Remain Calm

Syms' stories here are fascinating in their delicate construction and calm pacing while their messy characters struggle within. -Xtra

I've been saying that Shawn's stories shimmer and sparkle ever since I first encountered them. They are queer in the way all our interiors are queer -- radically singular, cruel, gentle, wrong, vulnerable, and erotically secret. I don't know another writer like him for facing down the strange with such warmth of heart. -Kathryn Kuitenbrouwer, author of All the Broken Things

What Syms achieves in his collection is something like Aristotle's "golden mean" between excess and deficiency. He doesn't other his characters by holding them at a distance. Nor does he erase their differences by pulling them so close that they all look the same. Rather, Syms shows what's human about each particular person without violently lumping them into some idea of the universal or the human condition. -Maisonneuve

The bloodied covers are pulled back on the pulsing muscles of the world in Nothing Looks Familiar, Shawn Syms's tantalizingly kinetic debut collection of stories about catfishing tweeters and methy cheque-bouncers. -National Post ("Best of 2014")

Shawn Syms's writing is lean and fearless. His stories are provocative and perceptive. From the hardest addictions to fluid online identities, Nothing Looks Familiar proves that everything is still discoverable. -Emily Schultz, author of The Blondes

The enjoyably diverse population of characters that reside in Shawn Syms' vibrant debut collection nonetheless share common threads. They often feel trapped -- or hemmed in, at least. They're ground down by life -- and their history of iffy choices. And, whether serious or dreamy, they're eyeing ways out. -Lambda Literary

Syms writes with a lean, parsed style, plain-spoken and transparent, which lends a sense of urgency and allows easy access to the emotional core of the stories . .. [The final story] is Syms at his best, building a world and its characters from a minimum of words, exploring moral complexities and contradictions with an unflinching gaze. It's an impressive piece of work, and a powerful crowning touch on a satisfying collection. -Quill and Quire

Shawn Syms's debut collection affirms what a lucky few (myself included) already knew --Syms is a talent to be shared. Widely. The lurid and the wholesome, the sexy and the deranged meet and comingle freely in Syms's stories, all of which are told with a counter-intuitive precision, a tidiness of mind that is the exact opposite of the interior worlds of his characters. Nothing Looks Familiar is a wonderful ride, and a damned good kick in the head. -R. M. Vaughan, author of Troubled and Compared to Hitler