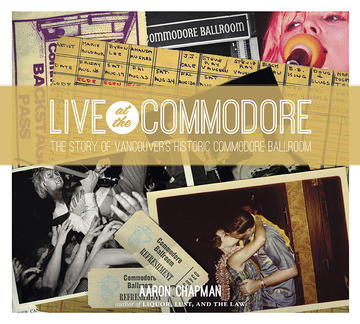 Live at the Commodore

Located in the heart of downtown Vancouver, the Commodore Ballroom is one of the best-loved music venues in Canada, if not the world; it's played host to a who's-who of music greats: The Police, The Clash, Blondie, Talking Heads, Nirvana, New York Dolls, U2, and, in more recent years, Lady Gaga, Tom Waits, and the White Stripes. But the Commodore's history extends back to 1930, when it was built in the splendor of art-deco style. It then became a magnet for Vancouver's decadent society set, who stashed their contraband liquor bottles beneath their tables. Through World War II and into the 1950s, the Commodore was where Vancouverites enjoyed a night out to hear swing orchestras and dance into the night.

Beginning in the 1970s, the Commodore became a full-on music club, a must-stop for breakout bands and other music acts before they became arena headliners. Vancouverites soon filled the place on a nightly basis, not only to hear the latest in punk, new wave, blues, heavy metal, and rock, but also to dance on its legendary bouncy sprung floor. It is now regarded as a music landmark, "the nightclub for all seasons" that continues to attract the hottest acts on tour, defying and outlasting other cultural venues that have gone the way of gentrification.

In Live at the Commodore, Aaron Chapman (author of Liquor, Lust, and the Law, a bestselling history of Vancouver's Penthouse Nightclub) delves into the Commodore's archives to reveal stories about the constellation of characters surrounding the club over the last 80-plus years, as well as startling, funny, and outrageous anecdotes about the legendary acts that have graced its stage. Filled with never-before-published photographs, posters, and paraphernalia, Live at the Commodore is a visceral, energetic portrait of one of the world's great rock venues.

Live at the Commodore scans the venerable venue's long history and delivers stories about those who took to the stage and those that made the club run, including infamous bouncers. -The Province

By reading the book you'll surmise that [Chapman's] research on the subject of the Commodore was insane, but it's his insights beyond the bouncy dance floor that connect the pieces of the puzzle. He manages to weave in knowledge of the varying states of our entire city throughout, making this book a must-read for not only music lovers but for anyone who wants to know more about the history of Vancouver. -Vancouver Is Awesome

A blazing new illustrated history of the fabled room that's hosted most of the figures who have made a big musical dent in Vancouver . .. Indispensable. -Georgia Straight

Chapman has painted a colourful portrait of a city at play, richly illustrated with photographs of performers and staff and vintage posters . .. The legendary ballroom has found its poet laureate. -Vancouver Sun

Chapman takes us through the history of the historic music venue at 870 Granville Street, with such remarkable insight into the musical acts who've played there, as well as interviews with the people front and back of house, who've made the Commodore the place for music. But his gift at writing history, is evoking the many eras of the nearly 85 year old venue, that you feel as though you've danced to big band music in the 30s, 40s, and 50s, or gotten up close to a musical act in the 70s and 80s, that you could read the time off their watch . .. [and] Chapman's buoyant, sharp and confident writing that keeps us engaged in this book. -TheCommentary. ca

What made the book so brilliant? I felt as though I was reading what could easily be turned into a moving and captivating Ken Burns documentary about Vancouver's entertainment history. -Miss604. com