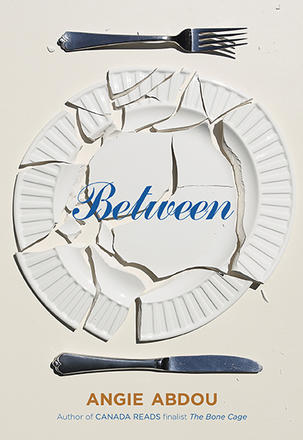 Angie Abdou's latest: a novel on the complexities of class, gender, parenthood, and desire.

Vero and her husband Shane have moved out of the sweet suite above his parents' garage and found themselves smack in the middle of adulthood--two kids, two cars, two jobs. They are not coping well. In response to their looming domestic breakdown, Vero and Shane get live-in help with their sons--a woman from the Philippines named Ligaya (which means happiness); the children call her LiLi. Vero justifies LiLi's role in their home by insisting that she is part of their family, and she goes to great lengths in order to ease her conscience. But differences persist; Vero grapples with her overextended role as a mother and struggles to keep her marriage passionate, while LiLi silently bears the burden of a secret she left behind at home.

Between offers readers an intriguing, searing portrait of two women from two different cultures. At the same time, it satirizes contemporary love, marriage, and parenthood by exposing the sense of entitlement and superiority at the heart of upper-middle-class North American existence through a ubiquitous presence in it: the foreign nanny. Angie Abdou comically and tragically tackles the issue of international nannies by providing a window on motherhood where it is tangled up with class, career, labour, and desire.

Between asks nuanced questions of and avoids pat answers on a thorny dilemma facing many families today. -The Globe and Mail

This third novel from the author of The Bone Cage, a Canada Reads finalist, fluidly and effectively captures family, work tensions and the cultural divide, offering just enough of a twist to keep the story fresh. -Library Journal

Between's descriptive passages are beautifully evoked, magnetic, even hypnotic. And Abdou pulls no punches: she does not avoid the difficult. She plunges right in. -Winnipeg Review

Between is not a novel that you'll forget easily with its dark humour, its lifelike characters, and a story of many complicated relationships that lead to a jaw-dropping conclusion. Pick this book up -- you won't be able to put it down. -Jowita Bydlowska, author of Drunk Mom

Angie Abdou writes with power, grace, and a fearlessness that takes you deep inside a seldom-seen world. Masterful storytelling. -Terry Fallis, author of The Best Laid Plans

In Between, it is the women who share the greatest burdens, yet still find it difficult to connect across lines of class and culture. Abdou has stared fraught subject matter in the face and handled it with grace and humour. Her refreshing novel sympathetically reveals women as they are, flaws and all. -Quill and Quire

In her unflinching portrait of a marriage in crisis, Angie Abdou bravely goes where few Canadian novelists would dare. The result is riveting. -Trevor Cole, author of The Fearsome Particles

There are no easy targets in Between, Angie Abdou's fiercely engaged novel about the culture clash generated when a privileged family with hidden problems hires a young and insightful Filipina nanny. Smart and fast, both troubling and funny, Between accelerates as you read, a crisis looming all the while the idea of home holds hope. You won't see the ending coming. But it's right when it arrives. -Timothy Taylor, author of Stanley Park and The Blue Light Project

Angie Abdou's Between presents the intricacies of two women's relationships in such a nuanced and layered story that it reads like a page-turner but could be used as a textbook in economics and gender studies classes: so smart. -Buried in Print

Angie Abdou has written a delightfully literate novel, a deliberate narrative built on two parallel stories that dovetail in a beautifully executed climax that I didn't see coming. -subTerrain

In Between, Angie Abdou doesn't take the predictable road. She deftly steers us into the deepest of emotional potholes, lands us in the ditch, and then finds a way back out again. This book is hilarious and disturbing, and an honest look at marriage and parenthood and the ways that entitlement and sex can drive wedges between us.

Darkly funny and elegantly written . .. Abdou is an important voice in Canadian fiction, and this strong new work will enlarge her already substantial body of devoted readers. -Vancouver Sun

Other Books By Angie Abdou