CBC Radio's The Doc Project presents a new documentary entitled "Just Leave, Please," featuring Lindsay Wong on the aftermath of publishing her critically acclaimed and highly successful memoir The Woo-Woo: How I Survived Ice Hockey, Drug Raids, Demons, and My Crazy Chinese Family on herself and her family after she moved back home following her book's publication.

Shortly after its publication in the fall of 2018, The Woo-Woo, a memoir about her family's struggles with mental illness, was shortlisted for the Writers' Trust of Canada's Hilary Weston Non-Fiction Prize; a few months later, it was featured on CBC's Canada Reads, defended by fashion stylist and reporter Joe Zee. But when the pandemic hit in 2020, the loss of literary festival fees and writer gigs meant that Lindsay had to return home to live with her parents, whom she learned were now overly cautious about what they said around her, lest their words appear in another memoir. 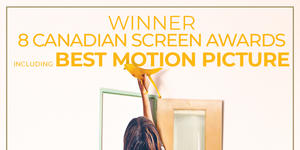