We are thrilled to announce that not one but TWO of our titles are finalists in the 2021 edition of CBC's Canada Reads: Butter Honey Pig Bread by Francesca Ekwuyasi and Jonny Appleseed by Joshua Whitehead!

Butter Honey Pig Bread will be defended on Canada Reads by chef, restaurateur, television host, author and award-winning recording artist Roger Mooking. Roger is best known as the host of the long running and successful grilling and barbecue show "Man Fire Food" on Food Network Canada and Cooking Channel. He is also the host of “Greatest of America” on Travel Channel, the host and co-creator of the internationally broadcast television series “Everyday Exotic” on Cooking Channel, and co-host of “Heat Seekers” on Food Network alongside chef Aarón Sanchez. In addition, Roger hosts "Man’s Greatest Food", currently airing on Cooking Channel where he sets out on a culinary odyssey around the USA seeking “Man’s Greatest Food”.

Jonny Appleseed will be defended by award-winning actor and filmmaker Devery Jacobs. Her breakout leading role in Rhymes for Young Ghouls (2013) landed her a nomination for a Canadian Screen Award for Best Performance by an Actress in a Leading Role. Since then, Jacobs is mainly known for her performances in Netflix’s The Order (2019-20) CTV’s Cardinal (2018) and Amazon Prime Video/STARZ’s American Gods (2019-20). Jacobs has also recently been announced as one of the leading roles in Taika Waititi’s new FX series Reservation Dogs (2021).

The twentieth edition of Canada Reads, hosted by actor, comedian, and host of CBC's "Laugh Out Loud" Ali Hassan, takes place March 8 to 11 and will be broadcast on CBC TV, CBC Radio One, CBC Gem, and online at CBC Books. This year's theme is One Book to Transport Us.

Click here to read all about this year's finalists and panelists! And listen to the panelists discuss their books on CBC Radio's "q" here.

We can't wait for the debates to begin! 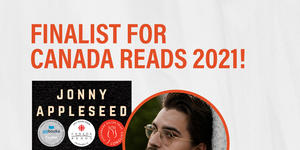