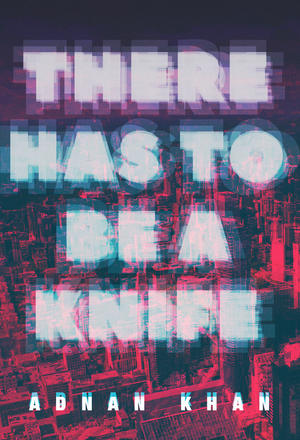 There Has to Be a Knife

Omar Ali is a ticking time bomb. A phone call from his ex-girlfriend Anna's father plunges him into darkness when he learns that she's committed suicide. Clueless and hurting, Omar turns to violence and petty crime to cope. His nefarious activities catch the attention of the RCMP, who pressure him into becoming an informant at a mosque they suspect harbours a terrorist cell. Unravelling from insomnia, sorrow, and rage, Omar grasps at his last shred of hope, embarking on a quest to find the note he's convinced Anna left for him.

There Has to Be a Knife examines expectations - both intimate and political - on brown men, exploring ideas of cultural identity and the tropes we use to represent them.

No one sleeps in Adnan Khan's propulsive novel of sex, Reddit, and precarity that brilliantly blends a critique of Canadian 'tolerance' with a raunchy paean to first love. -Tamara Faith Berger, author of Maidenhead and Queen Solomon

An entertaining page-turner, at once a thriller and an intersectional, transgressive work of fiction that makes no compromises in its alternating nihilism and tenderness. -Quill and Quire

This is a book that's alive, moving through the streets of Toronto, wiping sweat off of its electric body that hopes for resolution, that doesn't sleep, that presses against women's bodies, that longs for some kind of peace that never comes. Adnan Khan's poetic, sexy, and raw novel showcases one of the most intense and original new works on the CanLit scene. A new, brilliant, and bold literary voice. -Jowita Bydlowska, author of Drunk Mom and Guy

Khan writes with a noir sensibility, equal parts violence and tenderness. -The Globe and Mail

A sharp dissection of how grief -- wrongly channelled and enflamed by grievance -- can fuel destructive masculine behaviour, inciting flailing verbal aggression on the internet and in everyday life. -The Walrus

Adnan Khan's debut novel is a nuanced look at how trauma and masculinity converge in relationships. -NOW Magazine

Adnan Khan is a writer whose words and story carry heft. His voice is the one that many of us have been waiting for; we have suspected that such talent exists in this country - new, fresh, and weighty. There Has to Be a Knife is a must-read.
-Lee Maracle, author of My Conversations with Canadians

Like a sort of Notes from Underground for the hip-hop generation, Adnan Khan's darkly funny, compulsively readable, and deceptively moving first novel stares headlong into the struggles of its young characters and the harm they cause to others and themselves. In raw, streetwise vernacular, There Has to Be a Knife offers an acute study of toxic masculinity, of the ways in which unexpressed grief snarls through anomie into resentment and rage, and of the social scripts that exist for all of us - how we play our parts, and how we might also write our way into new stories.
-Pasha Malla, author of Fugue States

A searing meditation on isolation and grief in the modern world. There Has to Be A Knife is a striking debut.
-Iain Reid, author of Foe and I'm Thinking of Ending Things