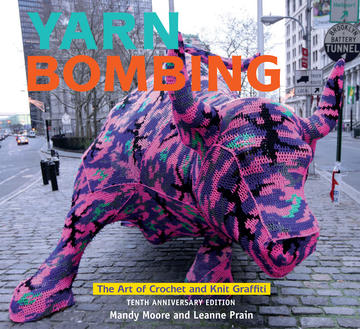 The Art of Crochet and Knit Graffiti: Tenth Anniversary Edition

When Yarn Bombing was first published in 2009, the idea that knitted and crocheted objects could be used as a political act of resistance was brand new. Ten years and thousands of public acts of yarnarchy later, the art of knit and crochet graffiti has entered the public zeitgeist, from the "pussyhat" making the cover of Time to OLEK's crocheted bull on Wall Street symbolizing The Great Recession: a cultural phenomenon that shows no sign of slowing down.

Yarn bombing is an international guerrilla movement that started underground and is now embraced by crochet and knitting artists of all ages, nationalities, and genders. Its practitioners create stunning works of art out of yarn, then "donate" them to public spaces as part of a covert plan for world yarn domination, or fashion them into personal political statements.

Yarn Bombing the book is a wildly colorful guide to covert textile street art around the world; it also includes over 20 amazing patterns, provides tips on how to be as stealthy as a ninja, demonstrates how to orchestrate a large-scale textile project, and offers revealing information necessary to design your own yarn graffiti tags.

This tenth anniversary edition includes a new foreword by the authors and a new chapter that includes many infamous examples of yarn bombing over the past ten years.

Subversive and beguiling, this new edition of Yarn Bombing demonstrates that the phenomenon of knit and crochet graffiti is more relevant than ever, especially in these troubled times.

Still every bit as relevant in 2019 as it was in 2009 if not even more - to the crafters and makers who refuse to stay hidden, stay quiet, and play by the rules. -Haley Pierson-Cox, author of Improper Cross-Stitch and Cross Stitch The Golden Girls

Yarn Bombing helped to bring craftivism to the fore when it first came out, and this new edition feels even more timely and relevant ten years on, as world events inspire people to take up their needles and hooks out of urgent need to use their craft to express vital ideas. -Kim Werker, author of Mighty Ugly

After ten years it is more apparent than ever the value of Yarn Bombing: The Art of Crochet and Knit Graffiti. The thorough documentation of the community gives historical foundation to the wide range of motivations for taking textiles outside, providing empowering inspiration for the ongoing and ever-changing movement. -Faythe Levine, author of Handmade Nation

Yarn Bombing is your guide (and inspiration) to making the public space personal again. Knit graffiti isnâ??t just about brightening a street corner - itâ??s about highlighting our connection to the past and to each other. As we become more and more focused on our cell phones, yarn bombing lifts our eyes from the screen and reminds us that we are linked as potential makers and creators, and that the world is full of surprise and grace. Mandy Moore and Leanne Prainâ??s guide is not just a work of art; itâ??s a call to revolution. -Rachael Herron, author of A Life in Stitches

Other Books By Mandy Moore or Leanne Prain