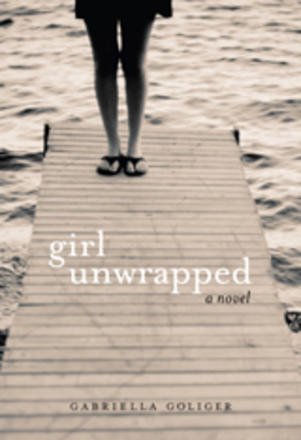 A powerful tale of the burdens and blessings of history, the divided self, and the quest to be whole, Girl Unwrapped is a coming-of-age story set in 1960s Montreal. Toni Goldblatt's awakening to taboo desire conflicts with the expectations of her Holocaust-scarred parents and with the conservative mores of her times. Yearning to re-invent herself, she flees to Israel in the wake of the 1967 war, but the Zionist dream doesn't
save her; instead, she finds the realities of life in the Middle East more complex than she imagined, and that her quest for normalcy has been thwarted. Only on her return to Montreal, when she discovers kindred spirits in the underground lesbian bar scene, does Toni begin to accept herself and find her own path.

Achingly honest, Gabriella Goliger's Girl Unwrapped is a novel about forbidden love, isolation, and the search for personal truth despite the stranglehold of family history.

Now in its second printing

Goliger's precise writing shows the hallmarks of a seasoned professional who knows exactly how to engage her reader: thoughtful prose, vibrant imagery, and compelling characters. Girl Unwrapped is a universally approachable story of self-discovery, told by a skillful and poised writer.
-Quill and Quire

Goliger unwraps Toni's evolving identity with descriptive passages and well-researched details about the era. She explores lesbian stereotypes, the rise of feminism and Toni's effort to find a place in the lesbian world. In doing so, Goliger delivers her moral: accepting one's sexuality is only the first step on a long journey of self-discovery.
-Xtra!

The tender closing of Toni's painful odyssey is filled with the blessings that come with no longer having to hide the truth. Goliger's symbolic transliteration of Lisa's Sabbath chant, "Chew's life," appears to have worked its magic.
-The Globe and Mail

Goliger draws subtle tensions between Toni's coming of age, her coming out, and the backdrop of global and familial histories.
-Canadian Literature

A hauntingly familiar coming of age story, yet poignantly fresh and new. Not just in Toni owning her identity as a lesbian, but doing this in a family of Holocaust survivors in a new country where the message is to conform at all costs. An authentic, touching story.
-Heather Menzies

A complex coming-of-age story about an only child of Holocaust survivors whose keen sense of outsiderness and otherness is intensified by her struggle with coming out as a lesbian . .. Ambitious in scope, at times poetic with strong imagery, this is a literary work that ultimately resonates with hope.

Though rooted in her Jewish heritage, Toni Goldblatt must wrestle with it too. The adult Toni, the courageous character that emerges in Gabriella Goliger's first novel, has her own strength, complexity and loveliness.
-Joy Kogawa

Author Gabriella Goliger engages the reader with strong imagery and word painting . .. the novel was difficult to put down.

Girl Unwrapped fits beautifully into the growing stack of literature about Jewish lesbian daughters of Holocaust survivors . .. One of the strengths of the novel is the sure way Goliger incorporates social and political issues into Toni's life.

The power of this novel lies in
the empathetic intelligence with which Golliger portrays the conflicts between her
vibrantly drawn characters . .. Girl Unwrapped is a satisfying and well-crafted bildungsroman.

A beautiful and powerful coming of age story . .. Girl Unwrapped is wonderfully descriptive, riveting, and a must-read.